THE CLIFF TOWN OF LALIBELA – FOR BACKPACKING, ADVENTURE & THE PURSUIT OF THE-ANSWER-TO-LIFE-THE-UNIVERSE-AND-EVERYTHING 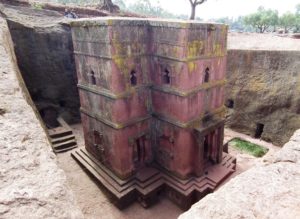 Probably no traveler’s guide, no pictures, no story can ever convey the unique character, the close to alien atmosphere of this truly strange eagle’s nest, perched 2600 m above sea level, in the wild mountains of northern Ethiopia: An inconspicuous, village-like town of modest stone dwellings, small tea-houses, a few guest houses and a couple of brand new, rather fancy hotels. Because modernity has – at last – come to Lalibela. In the shape of a fast growing tourism. And for very good reasons: Lalibela hides, and very literally hides, one of the hitherto strangely unappreciated wonders of the world, as mind-boggling as the Egyptian pyramids: The enigmatic 11-12th century cliff-hewn churches and monasteries, 11 in number, deftly hewn into the spectacular mountain slopes. They are so ingeniously melted into the landscape that you would not be able to spot them even on a relatively short distance, hadn’t it been for the ugly roofs-on -poles that have been erected lately on top of some of them, understandably enough to protect the basalt stone walls from crumbling under the attack of moisture and wind.

The story of the conception of this nine day wonder is even more stunning than the buildings themselves: During the 11th century wars with the advancing Muslims, the Christian king Lalibela chose to move his military headquarters from Axum up to the rugged Simien Mountains. And you don’t have to be a strategy expert to see the obvious military advantages of his decision: No European fortress or mountain castle I have ever some across, can compare with this location …
But the military emergency must have lost momentum; what started as a fortress, and consequently a settlement, a town after some time, must in the course of some centuries have grown, or rather exploded. It is of course vital to bear in mind that we are talking here of the oldest existing Christian state in existence. We are overwhelmingly reminded of the religious heritage of Ethiopia when we visit the countless churches; it seems like every other of them house a handwritten bible from the 9th century – or the fifth! Lying around in village churches. And, mind you, they are household articles, being used for Sunday mass! The congregations, we are told, will not put up with anything but the real thing; if the priest reads from a copied text, it is not the word of God. (The bible language is the ancient Ge’ez, these days, but authenticity seems to overrule other aspects). See picture below!

The first question that inevitably springs to the mind of a modern observer, is of course: How the …! did they construct this; how much labour has been spent on carving, hammering, chiseling the thousands and thousands of tons of stone? And the HOW is even less puzzling than the WHY? In a presumably poor society, under harsh geographical conditions, why spend so much time, labour, energy on something that would give so little material reward? The contemporary European cathedrals were, after all, brought to the world in economically robust and geographically very luscious regions such as France and the blossoming Mid- and Southern Germany. Of course we know very little of the economy of early medieval Ethiopia, but to say that the topography and the physical conditions in the upper Amhara region are forbidding, is a blatant understatement! The word “mystery” is depressingly easy to resort to, but it is hard to find any place where it would be more appropriate.
According to the historians, the construction period of the cliff churches must have lasted a couple of hundred years. Ethiopian folklore will tell that it took exactly 23 years! Voluntary
work, gladly offered by the pious and zealous citizens of the ancient settlement of Lalibela. Albeit with ample help from the Arch Angels. The latter are said to have been working during the night, while the good and honest men ( and possibly women?) – of Lailbela indulged in some well earned hours of sleep. In addition, and here things start to get really interesting, also the free masons – still according to local and national traditions – have had a hand in the matter. To most of us, this intervention might appear no more credible than the abovementioned assistance from celestials spheres. Without any pretence, I only, as a matter of fact, point out that the old free mason symbol is painted in the frescoes in several places – personally I observed it twice, large and conspicuous, in the roof painting of one of the major churches. (And – here is a treat for those with an inclination for juicy conspiracy theories: The maltese cross is ubiquitous in the decorations – our friends the Templar Knights have left their business card? 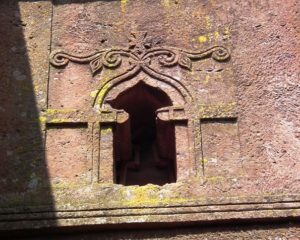 But before we proceed further, just a brief practical observation: Even to the eye of the technically very uninitiated, it is more than obvious that higher skills than that which voluntary amateurs can offer, have been at work here: Without administration by highly educated architects and engineers, these roman arches, impressive vaults, perfectly even surfaces and ingeniously constructed columns could not possibly have been imagined, say nothing of actually built. 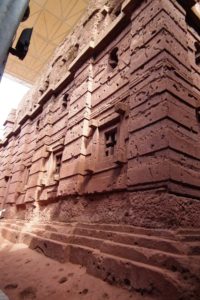 But back to the murkier aspects of human creativity: As for medieval iconography, our highly qualified and astonishingly well informed guide gave an exciting introduction to the symbology, the implications of the use of the maltese cross as well as the greek, the Armenian and the teutonic crosses in the highly artistic frescoes that decorate some of the most elaborate of the churches. The connection between medieval Europe and same Ethiopia is a somewhat controversial issue. There were rumors in Europe around the 12th century of a legendary Christian land deep down in Africa, supposedly governed by a king-cum priest called “Prester John”. But few were willing to believe such a story.